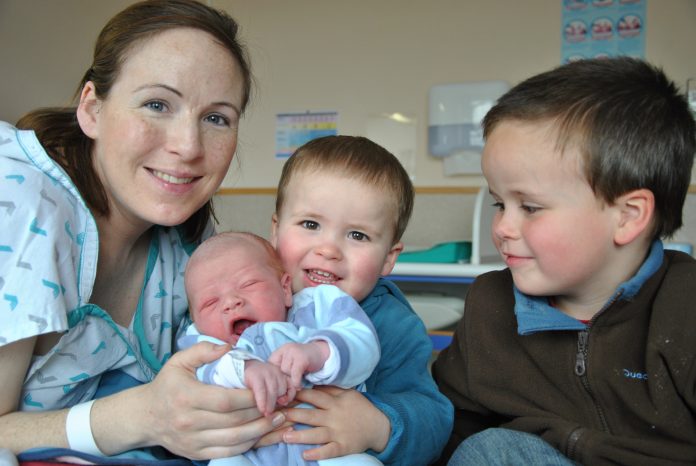 Siobhán McGonigle, founder of the village, has three boys, all born in Belgium. This is story of Callum, her third son, born in April 2012.

How had this pregnancy gone?

This pregnancy had been tougher than the first two, and I ended up on bed rest around 5 months in, as my cervix was thinning faster than it should, and I was having contractions. I arranged with my work to work from home almost exclusively, to avoid the stresses and strains of a daily commute, so that made a big difference!

For a long time towards the end of the pregnancy, Callum had insisted on staying in breech position, with apparently not *that* much amniotic fluid which meant he wouldn’t be able to turn easily. So for around two months, I was preparing myself for a breech birth, doing a lot of reading! At the time I was training to be an antenatal teacher myself, so I found it all quite fascinating learning about ‘hands-off’ breech births.

My gynaecologist had confirmed that he was happy that I try a vaginal breech birth (if the baby would stay breech), so that was already a relief, as some would not be happy to try. However, my gynae did say that they typically give an epidural to all women who attempt a vaginal breech birth, in case they have to use forceps … and this made me really angry as one of the main reasons why forceps (and vacuums) end up being used, is for that very reason, BECAUSE the woman has an epidural and can’t push properly. So for a while I was even considering contacting the gynaecologist who had seen me for Eamon and Jack, to get her opinion.

In the end, I had moxibustion (a type of Chinese medicine that can be helpful in turning a breech baby, which involves burning a herb close to the skin at an acupuncture point on the little toe to produce a warming sensation) performed by my physiotherapist, and who knows if it was that that did the trick, but he turned in time!!!

Were you having your baby when you expected? If not, was it earlier or later than your estimated due date? How did the timing affect your feelings leading up to the day? Were you more than ready to meet your baby, or did the whole event take you by surprise?

Callum was due on Monday 16 April, and since my first two labours had to be induced, I imagined that he wouldn’t turn up around his due date. And indeed, his due date came and went, and with my gynaecologist we agreed to schedule an induction 9 days later, on 25 April, in case he hadn’t come by then.

How did the birth unfold?

Anyway, after a great night’s sleep I woke at 5.30am to a contraction. Didn’t think *too* much of it as it wasn’t so bad, and I’d had a fair few like that over the past two weeks.

Fell back asleep, only to wake up 10 minutes later to another, and for the next hour or so, I stayed in bed, and the contractions kept coming, but weren’t getting any worse. I was actually really ‘enjoying’ them, observing them. With my first two sons, I never had any natural contractions – only those provoked by sintocinon during the inductions – and so this was such a novelty!

As I suspected, once I actually got up to get dressed they started getting more intense, but still manageable (i.e. not bad enough to freak out Eamon and Jack), and so the whole family got ready as on any other Monday morning. My husband dropped 2 year-old Jack at the creche (2 minutes walk away) as soon as it opened, and then we all hopped in the car to drop 4 year-old Eamon to school on the way to the hospital.

We parked the car at the hospital at 07:45, and the walk to the front door took quite a while as I was having contractions along the way, and would have to stop to breathe through them. We even bumped into a midwife I’d seen towards the end of pregnancy, and I could tell she was happy to see me actually in labour!

We got to the delivery ward 5 minutes later, my waters broke 10 minutes after that, just after I’d changed out of my regular clothes. After regretting having laboured in a hospital gown for my first two sons, I’d bought a proper maternity nightdress this time, and felt at least in control of what I was wearing … even if I didn’t need it for long!

The midwife examined me and told me I was already fully dilated (and could actually have started pushing if I felt like it – but I didn’t feel the need yet), and then 30 minutes and two pushes later, my baby was there. My gynaecologist just happened to be passing at that moment to see how things were going, and literally only had the time to get his gloves on and get ready to help me catch Callum. I can still remember feeling that strong, slippy body for the first time, totally in awe of the experience of actually birthing my own baby with no need for drugs or coaching.

After Callum was born, the midwife had to check who exactly I was … in the rush, we hadn’t actually had time to give any details when we arrived!

I was SO happy to avoid being induced this time, and was amazing to know that my body can actually manage to birth a baby by itself.

I felt so ready to enjoy this birth, that (although I was of course thrilled to meet my healthy baby) I was actually disappointed that it had all gone so fast.

Had you done anything to prepare for labour and birth, e.g. prenatal classes, yoga, hypnobirthing, doula support? If yes, what did you do? Do you think it helped? Looking back, would you have made any different decisions about your care or birth preparation?

In the run-up to Callum’s birth, I was actually training to become a prenatal teacher (UK university diploma with the University of Worcester, supported by the BCT). So I knew more about birth, what to expect, coping techniques, etc than I ever had in the past. I understood the mechanics of what was happening, and had developed such a respect for my body and the delicate hormone balance that can allow birth to progress as smoothly as mine had.

How were the first hours and days after your baby’s birth?

We left hospital two days after Callum was born. I’d originally planned to milk the ‘hotel services’ for as long as possible (and providing my husband was managing with the other two at home), as there’s a lot to be said for being somewhere where you really can’t do much other than rest.

But alas there was noisy renovation work, which I’d barely noticed on the Monday or Tuesday, but which was very irritating on the Wednesday. It was planned that I would have visits from a midwife the next three days, so I felt confident in leaving the hospital.

When Callum was born, we still hadn’t decided on a name, so his hospital bracelent just read ‘garçon’. But later that day, his dad and I finally agreed on the name Owen, and so started announcing the birth to family and friends. Then, in a rather shocking turn of events, the Belgian side of the family’s reaction to this Irish name was so extreme that we agreed to revoke the name and reconsider. A few days later, Callum was chosen … Callum Patrick Owen 😉