Home Meet the parents The scientist with a paintbrush – meet Jaroslav 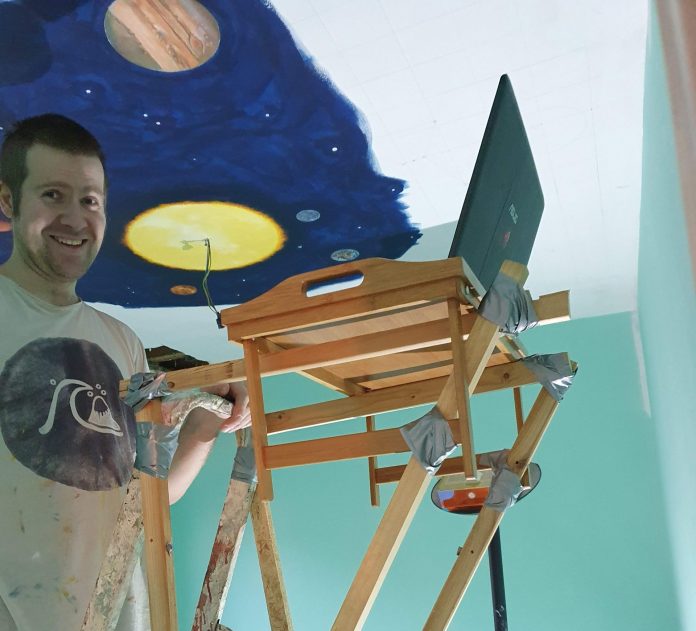 Sometimes the best things happen by chance, and that’s how we discovered Jaroslav Albert and a piece of art that would literally take our breath away.

Back in October 2020, the moderator of the invaluable ‘English Speaking Mums in Brussels’ Facebook group welcomed self-employed parents to share details of their businesses, with the aim of giving them a little extra exposure. Jaroslav’s wife Katya posted a time-lapse video showing how her physicist-turned-artist husband had transformed the ceiling of his son’s room into outer space:

So it was only natural that we wanted to find out more about the dad behind the paintbrushes!

First things first, Jaroslav, tell us a little about you and your family.

I’m originally from Slovakia, but I moved to the US when I was 16. I lived there for 12 years before moving to Belgium for work in 2009. And it’s here that I met my wife, Katya, who’s originally from Russia. She moved to Belgium when she was 7 years old and is now a Belgian citizen. We have two children: Lev, who’s nearly four and a newborn, Maya.

There have been some famous scientist-artists, such as Leonardo da Vinci and Samual Morse. For you, which came first?

Back in 1999, when I started at the City University of New York (CUNY), I had my heart set on becoming an artist. I’ve been drawing since I was a kid, and in high school I discovered I was pretty good at painting – my art teacher thought I was more than just good. So back then, it made sense to pursue art as a career. At university I was very interested in developing skills in classical painting and sculpture, and became convinced that art was my calling – and always would be.

However, due to forces I do not quite comprehend to this day, I became interested in physics. It all started when I found my old high school physics textbook. For some reason, I got it into my head that physics would be a great hobby, so I began solving random physics problems (mostly failing but learning in the process). I still wanted to have a career in painting or sculpture, and physics was just a side interest. But eventually, physics started to take more and more of my time. Once I started taking physics courses at my university, the time I could devote to art became almost non-existent, and my interest in it dwindled.

So art fell to the wayside, and you found yourself on a path towards a career as a scientist. But now you’ve come back full circle. How did that happen?

After I got my PhD in the US, I was offered a position as a postdoc researcher in systems biology in Belgium. I had always wanted to move back to Europe, so I gladly accepted the position. That role was related to genetic networks (how genes interact with each other and how one can infer these interactions from various data), and after that, I worked in medical physics (cancer treatment via proton radiotherapy).

Since my last mission ended in 2019, it’s been challenging to secure funding for research, or even get a permanent position. My passion is still there, so I continue to research from my proverbial garage (our couch). I also make YouTube videos about the physics of general relativity – although the content is technical, I try to add to them some ‘artistic elements’, such as intros that are parodies/homage to intros from famous TV shows.

But all in all, I’ve taken the hint that it may be time to hang up my white lab coat, and throw myself back into the arts.

The ceiling art you painted in your son’s room is just spectacular. What inspired you to undertake such an ambitious piece and what was the process like?

For the first three years of his life, my son slept in our bed. My wife and I were anxious about the transition to him sleeping in his own room, so we wanted to make the room as fun and comfortable for him as possible. And it worked! He slept through the night on the very first try.

As well as being something beautiful and interesting to look at, I was also hoping the painting would be a source of inspiration for him when he’s older, a well of curiosity. I pictured us lying in his bed staring at it and him asking questions such as: What is a planet? What is a star? How far does this blackness go? I imagined myself telling him about the significance of the angles between the planets – which correspond to the actual angles on his birthdate – and being excited to hear his reaction.

The ceiling was 8 square metres and the project took about 10 days in total. I was working from about 10:00 to 15:00 every day – I couldn’t work after 15:00 as my son would be home from school already. Painting on a ceiling is hard work, and I had to get a little creative in making sure I had the best possible working environment with my laptop right beside me for reference.

Since the beginning my son was intrigued by the whole thing. He would fall asleep talking about it. Recently he started pointing at different planets and asking questions, such as “Daddy, which planet did you live on when you were little?”

Following on from this exceptional piece, you’re now embarking on a new adventure, and developing your career as an artist/muralist. Tell us more about this new journey.

I believe that children should feel comfortable in their own rooms. And I see that murals can help to bring about that comfort, whether it’s a realistic rendering of the solar system, like on my son’s ceiling, or a painting of a favourite cartoon character or the entire cast of Bob the Builder! By working in close collaboration with families, I hope to be able bring some of that magic to their homes.

The COVID pandemic meant that I had to put my idea to launch my mural painting business on hold. But now, with vaccinations progressing well, and restrictions easing, I’m excited to be able to start accepting commissions.

In terms of style, I’m open to pretty much anything that artistic parents might want for their kids, and hope to develop a wide repertoire. In these early days, as my business grows, I’m working on a portfolio that will consist of smaller projects primarily intended to entertain my own kids.

What would the process look like if a family wants to commission you to paint a mural for them?

The most important thing is that a mural means something to the child and their family, and will put a smile on their faces. So after establishing exactly where the mural will be – considering the size, orientation, natural light etc. – I’d sit down with the family and listen to what they have in mind.

If they’re not sure what they want, or are keen to hear my ideas, I would propose some suggestions, based on their child(ren)’s interests. If needed, I can even suggest a colour scheme for the whole room, so that it works well as an ensemble with the mural and makes the most of the available natural lighting. I can also take care of any light repairs that would be needed to ensure the best possible finish on wall or ceiling.

Based on all the information gathered, I would prepare a few coloured sketches to give the family a good impression of what the final work would look like. And I’d also give them an estimate of the price for what I’ve presented. Once they’ve had time to review my proposal, we’d have a follow-up discussion where they can provide feedback, or if the proposal meets their needs, to discuss the practical aspects of actually starting the work, such as timing.

Interested in bringing your child’s room to life with a hand-painted mural?