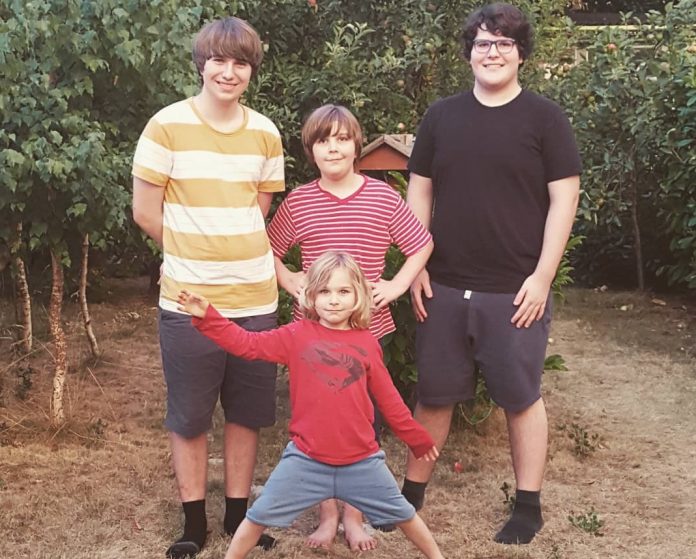 Please tell us a little bit about yourself and your family:

I grew up in rural Sweden and attended university there and in the US. I came to Leuven for a graduate studies research year in 1996, met my husband, and started working in Brussels while he finished his graduate studies. We would end up having two babies in Belgium, August and William, born 18 months apart, before leaving Belgium and moving to the Middle East, where we had two more children.

Our first-born son, August, arrived in October of 2001, a few days after his due date, just a month after the horrible events of 9/11. We had planned a homebirth in our apartment on Diestsestraat in Leuven with a lovely midwife, but August was finally delivered by c-section.

How were you feeling in the run-up to August’s birth?

When we were expecting August, our first baby, we were very much looking forward to the birth. Even though everyone knows that a due date is not set in stone – our midwife kept telling us, “The baby does not have a calendar in there, you know!” – when August’s due date came and went, every hour felt like a lifetime.

We were ready, the pregnancy had gone perfectly, so why was he not coming out?!

Friends kept telling us to enjoy our “freedom” while we could, go out, have fun, sleep, but we just wanted our baby, and I really wanted my pregnancy to be over.

When my water finally broke in the middle of the night, four months days past the due date, it was a great relief!

How did the birth unfold?

My water broke in the wee early morning on Wednesday, and we immediately called the midwife who came over to check on me.

Since I was not having regular contractions yet however, she told us to get some rest and that she would come back. It was difficult to sleep or do anything constructive. We went about our morning, waiting.

My friend, an experience mother who had offered to be there during the birth, came over and fed me pineapple and herbal tea, which was supposed to help get the labor going. We walked around town, because walking was supposed to help as well, but nothing worked. The midwife came by in the early evening and I was a mere two cm dilated.

Our midwife took us to a hospital in Mechelen (Onze Lieve Vrouw Ziekenhuis) where she worked with a doctor who was partial to homebirths.

Once there, I was hooked up to Pitocin, which brought on violent and painful contractions almost immediately.

The next 36 hours are a bit of a haze. We were put in a very nice room with a small pool, a shower, birthing ball, stools, a TV – just about anything you could imagine helping you get through labor. I spent quite a bit in the shower with the shower head against my belly, I walked up and down the hall, squatted, and labored in just about any position imaginable.

After 26 hours I was barely 7cm dilated and getting really tired. The doctor suggested we try an epidural to get my body to relax and to allow me some rest.

From the moment I had got pregnant, I had been against an epidural or anything artificial, however at this point I was ready to try anything to get my baby out, so I agreed.

The epidural helped. After a few hours, I was finally 10cm dilated and fully effaced. The doctor removed the epidural so that I could get ready to push. This was it.

However, something was not right: August was not coming down the birth canal the way he should, because his head was stuck.

We tried various positions, the midwife used her hands to try to guide baby, and our obstetrician used every trick in his book to help get August out. Around 8:45 pm, baby’s heartbeat started going down, and at 9pm on Friday the 12th of October, instead of celebrating his 20th wedding anniversary with his wife, our obstetrician got ready to deliver August by emergency c-section.

Because I had already had the epidural put in, I did not need to be sedated, and was able to stay awake for the birth. Everything went very quickly.

My husband was whisked away to get scrubs on. I remember being so scared when they put me on the table in the OR, not quite sure what was going on, and tears were streaming down my cheeks.

The anesthesiologist whipped them away, reassuring me that everything would be OK. Just a few minutes later, my husband was by my side, I felt some tugging, and then suddenly he had a baby in his arms: a perfectly healthy, crying, banana head baby. “It’s a boy!”

The pediatrician gave him a check-up and a wipe down, helped my husband dress him and brought them to our room to wait while I was sewn back up. Within forty minutes we were all reunited, and I was able to put baby on my breast for his first feeding.

Had you done anything to prepare for labour and birth? If yes, what did you do? Do you think it helped? Looking back, would you have made any different decisions about your care or birth preparation?

To prepare for labor and birth, we had read several books, and especially embraced all the advice given in Dr. Sears’ books the Pregnancy Book and the Birth Book.

The best preparation however was making sure that we had a great support network, and especially a friend who had gone through labor and birth herself.

Nothing can replace that kind of help.

How were the first hours and days after your baby’s birth? How would you describe your recovery? What support did you have during the first weeks after the birth?

Even though we were in a hospital and not in our own home, the hours and days following August’s birth were not very different from what I had imagined when I thought we would have a homebirth.

August slept in the bed with me or in a crib right next to my bed at the hospital, my husband was right there with us, and when we were able to go home, the midwife came every day to check on me and August.

My friend helped me get the breastfeeding going and helped us adjust to life with a baby. My mother flew in from Sweden to meet her grandson and help around the house.

About a week after we got home, I got a call from my brother telling me that my grandmother died. I had always been very close to her – she was the first person I called to announce that I had a baby boy and that we were going to name him August. “August?!” she said, “What a terrible name!” According to her generation, it was a name for uncles or parents, and nothing you would want your baby named.

Because of the events of 9/11 just a month prior, getting an emergency passport for August was complicated, but in the end, we managed to get all the paperwork done, and at not even two weeks old, August flew with us to Sweden for the funeral.

August birth were anything like I had imagined, but in the end – even though it seemed SO important when I first got pregnant – it does not really matter how our babies were born.

If you have also been pregnant and given birth in another country, how was your experience different than in Belgium?

The support network in Belgium – from prenatal care, to birth, and postnatal care – is amazing compared to a lot of other countries in the world. I can not only compare it to my later experiences giving birth in the Middle East, but to those of friends around the world, who have given birth in countries like the US, Sweden, Great Britain, and Australia.

The number one comfort that I appreciated was the home care during the week immediately following the birth. Every day, the midwife would come and take care of my body, check in on the baby and the breastfeeding, make sure the husband was staying sane, and even help with the house a bit if needed.

In my experience, this is the most crucial time when having a baby. When I had my fourth and last baby in Lebanon, there were a lot of complications following the birth, and I had to have my c-section wound redressed every day for months (long story).

I had no choice but to leave my newborn at home and go to the hospital for this, a trip that could take a couple of hours every day and was physically painful and exhausting.

Again, luckily I had great support from family – by now, August was old enough to give baby a bottle of pumped milk while I was gone – but I can imagine that if this had been my first baby, everything from breastfeeding to physical recovery could have been jeopardised.