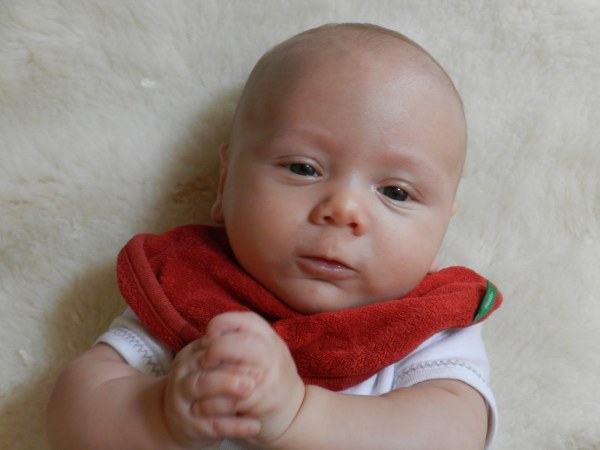 This birth story, of Sandra’s second son (read about her first son’s birth here), was originally published on her blog BXL Sprout and is republished here with Sandra’s kind permission.

Wow, it’s been over 3 months already!!! Is it really possible it’s been so long? Seems like just the other day I was dragging my enormous belly around Brussels!

Well, I have been busy, that’s for sure. Two kids are a whole other dynamic, especially when one is always keeping the other up (and no, I’m not referring to the baby not letting Sprout 1 sleep – it’s actually been the other way around, but that’s a whole other story).

I figure it’s high time I write down Sprout 2’s birth story, before the details get completely blurred in my mind…

The night before I was having what I thought were Braxton Hick contractions since it wasn’t another 2 weeks until my due date. Just in case, I decided to pick out the baby outfits and such I wanted to take to hospital.

I woke pretty normally the next morning, went to take Sprout 1 to school, and came back home to pack my bag. I kept having contractions all morning and it was really beginning to sink in that this was it. My Mom was staying with us, and she wasn’t quite sure if I was in labour either because she said it didn’t really look like I was in pain, but started to agree I might be when my contractions were about 10 min. apart.

I was still a bit doubtful, however, because I didn’t have a “show” like I did with Sprout 1. Otherwise, it felt like the first phase of labour was well on the way. R was at work, so I called to let him know he might have to come home at some point during the day. I still felt ok, and contractions were short and spaced enough that I felt ok to pick Sprout up from his half-day at maternelle. I did have to slow down a few times on the way due to mild contractions.

Once I was at maternelle, contractions were closer together and I had to stop a few times on the way to the gate, which attracted some attention from passers-by, some of who stopped to ask if I was ok. Sprout was finally out and his teacher was explaining how he had a good morning that day and I had to hurry her along saying, sorry but I think I’m in labour so really must go! Her face was priceless, slightly panicky. But all was well and off we headed to the car. A couple of friends checked up on me to make sure I was ok to drive, and I really still was.

On the way home I called R to say he better come home so I could go to the clinic and he asked if I could stop by his office on my way to pick him up! Ha! he wasn’t fully aware of how far along I was. Of course I said no. He caught a taxi and met me at home. After getting my bags and explaining to Sprout he was going to stay with his grandma while we went to the clinic for his brother to come out of the belly, off we went in midday traffic.

When we got to the maternity at St. Michel, I saw my doctor was there (yay! at least he wouldn’t be late). We explained how we thought I was in labour, but no one really took us seriously. They sent us into one of the rooms with an intern midwife to determine if I really was in labour and if I would be admitted. The intern clearly still had a lot of training to do, especially bedside manners! Luckily I’m not one to freak out or anything. Mostly I just wanted her to shut up because she was consistently talking and asking questions.

She hooked me up to the monitors, finally getting it sort of right after a few attempts and proceeded to tell me she was going to monitor me for a while and then, in her words (well, her words were French, but you get it) “we’ll decide if you are in labour”, said in a most skeptical voice. Well, um, no YOU won’t decide… but I kept my mouth shut.

After finally deciding I indeed was in labour, I was admitted and asked tons of info for filling out some forms (through contractions – really? I had to keep interrupting her) and get hooked up to the IV drip thingy (without the actual drip – don’t know the technical terms!). Anyway, while trying to insert the thing, she totally went through my vein and I was bleeding. Oh, and did I mention I have a slight fear of needles… fun indeed! She had to ask a colleague to get my other arm. No problems there, thankfully.

At this point she wanted to give me an enema!!!! Which I didn’t want and so I proceeded to lock myself in the bathroom until I didn’t need one! Ha! Finally my little birthing room was cleared of all people (R went to register me and get a bite to eat) so I turned on my Natal Hypnotherapy Labour Companion tracks on my iPhone and began to relax. I used this book and cd for preparation this time since I had lent my Mongan Method Hypnobirthing book to a friend and hadn’t gotten it back yet. I liked the Mongan method, but didn’t want to get the same book I already had so I tried Natal Hypnotherapy this time. It was a tremendous help! I won’t say I actually went into self-hypnosis as I’m not quite sure I did, but it really did help through contractions without any medication and I’m pretty sure I could attribute being so calm and nobody believing I was in labour to having used this. Totally recommend it!

I did use the birthing ball this time, since Sprout 2 was in an awkward position and it was soothing. Things progressed fairly quick. I went in at about 13h30 and Sprout 2 was out by 16h30 I breathed through the contractions like the cd recommends and was fine talking in between.

The room was very hot though and I was feeling quite tired near the end and thought I wouldn’t have the energy for pushing. This is normal though, it’s the transition period when you don’t really think you can keep up anymore and then… you muster up some superhuman strength and out came little Sprout in the most beautiful moment ever.

Thankfully no episiotimy this time, only some small tears which were stitched up. Healing was sooo much better! Oh, and at the end, the doc told me he never thought he would be helping to deliver my baby that day, he really was expecting to send me back on my merry way for false labour.

Another interesting tidbit, I spoke French to everyone the whole time, and everyone spoke it back to me (except R of course, we do Portuguese between us). As soon as Sprout 2 was born and I said something along the lines of “hello there beautiful!”, everyone switched to speaking to me in English, despite my answering in French. This happens all the time soon as people hear me speak English. Why, oh why? It’s nice people want to be helpful, but it makes speaking better French that much harder.

So, we were off to a good start and he most definitely did not look like 2 weeks early (Sprout 1 also came 2 weeks before the first estimated due date, so just goes to show…). He was a plump 3kg250 and a short 49cm. This one most definitely takes after me… HA!

For those of you wondering how long you have to stay in hospital for a second child here, they generally tell you 3 to 4 days (5 to 7 for first). However, with Sprout 1 at home, and not having particularly enjoyed staying in hospital the first time around, I wanted to be home as soon as possible, where I would have more loving help, a familiar environment and my oldest son.

A sweet friend of mine told was only in for 24h because she got a midwife to go home to take care of her and baby and perform all the necessary tests (the reason they really don’t want you out before).

I used the same service she did (http://www.zwangerinbrussel.be/) and both of us have only good things to say.  They speak EN, FR and NL and are super sweet and helpful. Plus, it’s covered by the mutuelle! All you have to pay is their dislocation fee (about €5)! I was so happy for this and really believe it was an incredible aid to our good start to breastfeeding and to him not having developed jaundice.

But I’ll leave the breastfeeding story for another day.